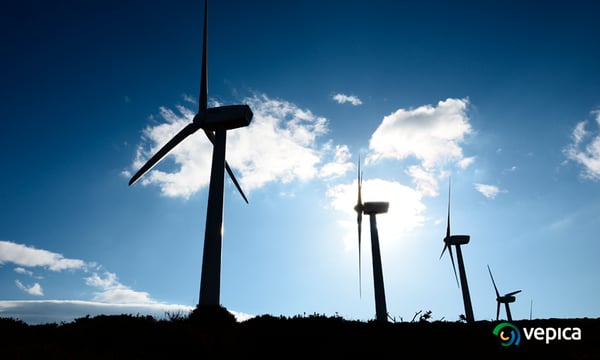 Since the construction of the first wind turbines in the late 1970s, far-reaching technological advances have been made. The rotor blades are now 16 times larger and the wind farms produce 100 times more electricity.

A 2015 report from the Department of Energy, projects that wind in the USA, will provide 20 percent of the country’s electricity by 2030, compared to 5 percent – 65 gigawatts worth – today.

The US energy market will eventually require 50% or more of its total power demand to be in the form of renewable energy.

At present, Wyoming has only developed 1,400 MW of wind projects, less than 3 % of its optimal potential. The state has a full potential for tens of thousands of megawatts of wind power.

The coal sector in the State of Wyoming continues to be the largest in the country but faces very strong pressure from cheaper sources of fuel, both traditional and renewable (Gas and Wind especially). Wyoming wind farms are becoming so cheap that they can out-compete solar, gas and coal, even without subsidies.

Compared to other sources of energy, coal costs between $60 and $143 per megawatt hour, while the cost of a combined cycle natural gas plant is between $42 and $78 per megawatt hour. Nuclear is very high, between $112 and $183. None of them is as cheap as Wind for which costs range between $30 and $60, according to the most recent Levelized Cost of Energy Analysis (2017), an annual report on the development costs for different energy sources, by Lazard financial firm. (Because the state is so windy, next to the Rockies Mountains, Wyoming has even lower costs in Wind Energy than most other places).

Several miles north of Medicine Bow, Wyoming, there is a Renewable Energy Project with the best, guaranteed wind speeds in the USA.  Since 2011, a lot of hard work has taken place, collecting data on wind speeds and obtaining environmental information for this project.

Once complete, the VIRIDIS project will generate over 2,400 MW, producing approximately 6.9 million MW hours per year, enough energy to power about 660,000 homes. VEPICA USA is the main EPC Contractor and 50% shareholder of the VIRIDIS project.

The location of the Project presents a great advantage; there are multiple transmission lines available to connect it to the net: PacifiCorp, Western Area Power Administration (WAPA), TransWest Express, (through PacifiCorp's Gateway), Mountain West Transmission Group (MWTG). This improves the stability of the electrical system and reduces infrastructure costs.

The VIRIDIS project is providing the State of Wyoming with significant revenues in the form of taxes, which will be paid to the State, Carbon County, public facilities like schools & hospitals and municipalities within the county. It is also generating between 850 and 1,700 permanent direct and indirect jobs during the seven-year construction period. It is estimated that local workers will represent up to 25 percent of the construction workforce.

The costs of electricity continue to fall in Wyoming thanks to renewable energy. The state has the capacity to generate self-sufficiency for the most part, and to export and sell electricity to other states. There are more than six ongoing projects for transmission lines to connect the State of Wyoming with California. These lines will also go through the States of Idaho, Nevada, Utah, Colorado and Arizona.

In the long term, the projects in Wyoming are not only good for air quality and stabilizing the Earth's climate, but also for the state which could become a large wind-generation state - providing emission reduction credits for its own generation and other states using coal.

To find out more about our projects and the services we offer, contact: andres.pulido@vepica.com