Environmental considerations for construction of the Dragón-CIGMA pipeline

The prestigious American magazine Gas Processing & LNG is premiering a section on Sustainability and our engineer José Solano, an expert in the field, will be part of the group of pioneers to participate in the first publications.

Be sure to read his interesting article and share it on your social networks.

Environmental considerations for construction of the Dragón-CIGMA pipeline

Venezuelan state oil firm Petróleos de Venezuela SA (PDVSA) proposed the Mariscal Sucre Project (MSP) to develop offshore gas reservoirs in the northern Paria Peninsula. During early production, the transportation of non-associated gas exploitation in the Dragón field to the mainland was planned through a 36-in. gas pipeline. The pipeline was planned to stretch between the Dragón field and the Gran Mariscal Ayacucho Industrial Complex (CIGMA) in Güiria, Sucre state.

The pipeline route was set to cross a small portion of the mainland, the Los Obispos Isthmus, within the Paria Peninsula National Park (PPNP). This led to a construction analysis for the passage of this onshore section to make the least possible impact on the biota and habitats present in this sector. Environmental measures were designed to prevent and mitigate potential environmental impacts, specifically at the crossing of the Los Obispos Isthmus, where the southern beach is a spawning area for sea turtles on the Paria Peninsula.

Sea turtles are an endangered species. Studies report that they spend the first 25 yr of their life in the sea, and always return to spawn at the same beach where they were born. The engineering of the pipeline project was oriented to carry out the construction of this section from November to February, so as not to interfere with the sea turtle nesting period. The excavated sandy material was also kept to restore the site to similar conditions regarding texture and compaction of the material.

Thanks to an alliance between the consulting team, the project sponsor and the Venezuelan organizations Ministry of People’s Power for Ecosocialism (MINEC) and National Institute of Parks (INPARQUES), the Authorization for Affecting Natural Resources (AARN) was obtained, and environmental sustainability was incorporated as part of the project design.

Project design background. Venezuela has proven onshore and offshore natural gas reserves of more than 200 Tft3. As part of development plans, PDVSA proposed the MSP to develop offshore reserves in the north of Paria Peninsula, with an estimated production of 2,000 MMsft3d.1 The MSP project is developing four fields (Dragón, Patao, Mejillones and Río Caribe) of non-associated gas in the north of Paria to produce up to 1,200 MMsft3d for the domestic market. The remaining volumes are planned for export.

During the early production stage, PDVSA considered transporting the gas produced from the Dragón field through a 36-in.-diameter pipeline to the CIGMA processing facility. Based on the results of the route analysis, the project team decided to cross the Los Obispos Isthmus in the PPNP, as can be seen in Fig. 1.2 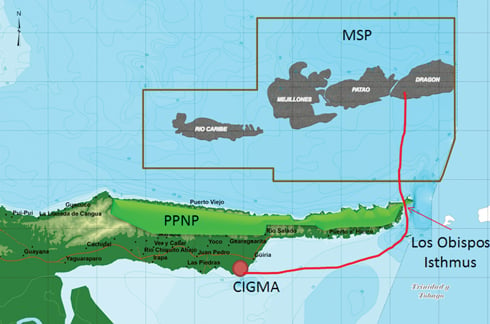 An analysis of construction techniques was carried out to determine the least possible impact on the ecosystem of this land crossing. Environmental measures were designed for the prevention and mitigation of the identified potential environmental impacts, specifically at the southern beach (Cereza Bay), since it is a spawning area for sea turtles.

Ambioconsult CA, a subsidiary of Vepica, developed the Environmental and Sociocultural Impact Assessment (ESIA) of the Dragón-CIGMA Pipeline2 to obtain the AARN in compliance with applicable Venezuelan regulations.3 This article describes how the environmental variables were considered in the early stage of the project by designing preventive and complementary measures for the minimization of environmental impacts, specifically at the crossing of the Los Obispos Isthmus.

Pipeline characteristics. The 36-in. gas pipeline was built of carbon steel with a grade of material and thickness compliant with the service (sweet gas), with the corresponding coatings for corrosion prevention in a marine environment, and a total approximate length of 103 km. Of this length, 200 m corresponded to the Isthmus crossing.2

For the Isthmus crossing, the project design considered technical, economic and environmental criteria for different options, with the most relevant criteria being: 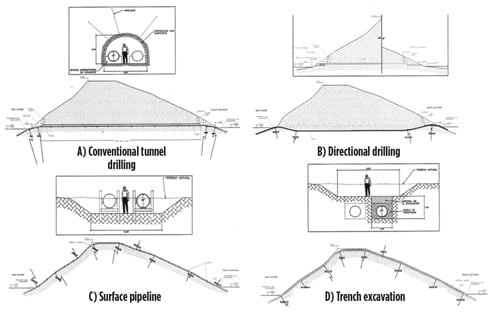 A quantitative analysis of these criteria was performed. The trench excavation was determined to be the best option,4 since it is simpler to construct and to implement safety measures to mitigate the risks of local geological faults, as the location is the highest seismic zone in Venezuela. In addition, this type of construction has a reversible environmental impact to the ecosystem in the medium term.

Venezuela and sea turtles. Seven species of marine turtles are traditionally recognized worldwide, distributed into two families: Cheloniidae and Dermochelyidae. The first family groups the species with hard plates covering the shell, while the second family contains the species without plaques that cover their shells when they are adults. 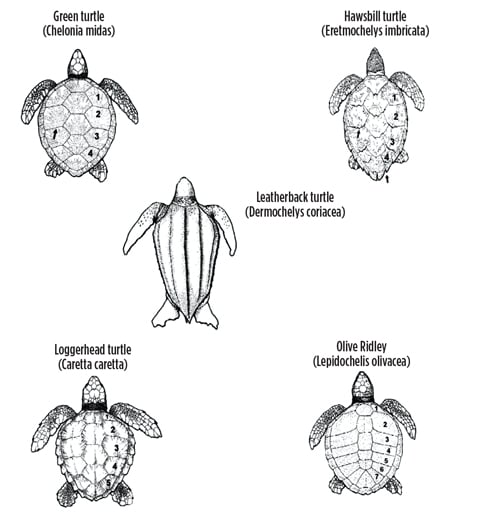 FIG. 3. Venezuelan sea turtles identification guide.Guada and Vernet7 describe the presence of Loggerhead turtles in the Gulf of Paria, according to reports from fishermen in the area. The reproductive season of the Loggerhead turtle in Venezuela covers February to October.Sea turtles are protected by Venezuelan regulations for endangered animals, as well as by the Convention on Biological Diversity, the Ramsar Convention, and the Inter-American Convention for the Protection and Conservation of Sea Turtles. Also, special administration areas, such as the PPNP, have been created for this purpose.

Meanwhile, the Leatherback—the largest species of all sea turtles—has been observed in the Gulf of Paria and the Paria Peninsula, reported as the most important reproduction area for this species.5,7

Among the nesting beaches confirmed for these species, the largest number is reported on the southern area of the Paria Peninsula.8,9 The southeastern end of this area constitutes the most important spawning zone for the Hawksbill turtle, with confirmed nests in the beach of Cereza Bay. The nesting season for this species can extend from March to October, and the reproductive peak in this area is between June and August.10

The importance of the conservation of these nesting sites lies in the fact that scientific studies on the lifecycles of sea turtles report that after being born, they spend their first 20 yr–50 yr of life in the sea, and then return to the same beach where they were born to spawn. The turtles can sense the “magnetic signature” of the coast off which they submerged for the first time. They use it as an internal compass, relying on earth’s magnetic field to guide them.11

Environmental impacts from construction. Venezuela’s existing ESIA methodology3 is a systematic process that predicts and analyzes the relevance of the effects of a project on the physical, biological, social, economic and cultural aspects of the environment, considering its sensibility and the applicable regulations/restrictions to identify and assess the potential environmental impacts associated with construction.

For the gas pipeline project, these impacts were identified and classified according to three main aspects: physical, biological and socioeconomic. Environmental measures were designed for the relevant environmental impacts.2

Results and discussion. Cereza Bay is constituted by fine sediments that maintain a specific grain size distribution and a high degree of humidity. The texture, humidity and degree of compaction of the sand are determining variables for the successful nesting of sea turtles.

As a result of an integral analysis of the project in contrast with its environment within a national park, the following environmental measures were proposed for inclusion in the project design:

Other measures regarding stakeholder engagement, such as education programs for contractors and approach campaigns for fishing communities, were proposed for the impacts associated with the construction of the remainder of the pipeline. These actions were intended to prevent, mitigate and compensate the potential impacts of the project.

Based on the results obtained, the main achievement of this study was to demonstrate that the incorporation of environmental sustainability as part of a gas project is possible. In this case, an alliance between the consulting firm, the project promoter and the environmental agencies helped achieve this. The implementation of multiple technical exchange workshops between the key stakeholders finally allowed the AARN to be issued.

Venezuela has large natural gas reserves that will play a key role in the upcoming energy transition as a “bridge fuel” between fossil fuels and renewable energies. However, the construction activities necessary for its production, transport and processing imply potential environmental impacts that must be assessed beforehand, to ensure that projects associated with natural gas exploitation are sustainable. GP